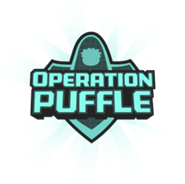 The logo for the Party.

Operation: Puffle was an event in Club Penguin, that started on November 21st 2013, and ended on December 4th 2013. It had been rumored to occur for months and was confirmed by Polo Field and Spike Hike.

Retrieved from "https://club-penguin-music.fandom.com/wiki/Operation:_Puffle?oldid=12160"
Community content is available under CC-BY-SA unless otherwise noted.